Despite the Pennsylvania Turnpike bisection, the noise is not noticeable.How often does one come away from a sporting event with the happy realization that it should have been on your “bucket list”.  The 2016 Ryder Cup at Hazeltine National Golf Club was just such an event for this editor.  The spectacular singles matches of Garcia vs Michelson and McIlroy vs Reed were among the two greatest matches ever televised. The event – perhaps the best ever. 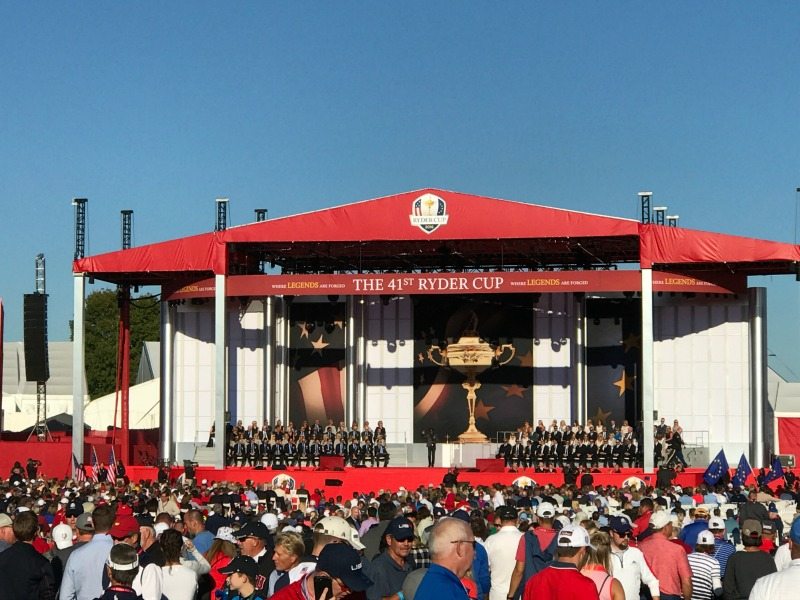 The scale of facilities at the 2016 Ryder Cup are unsurpassed by any other major golf event.  The opening and closing ceremonies were conducted on a specially constructed stage.  The merchandise tent was more than one city block long.  Despite the size of the tent and the number of checkout stands, crowds sometimes endured checkout lines of up to 30 minutes. 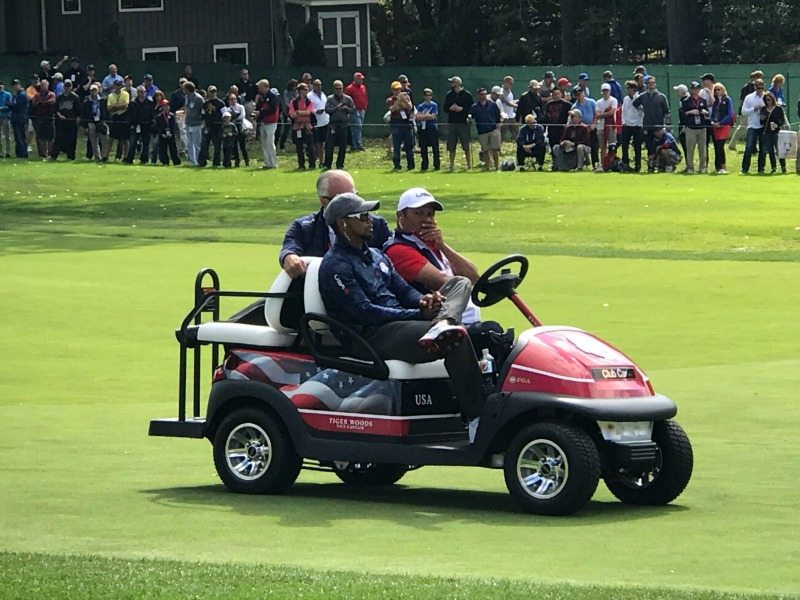 Specially painted golf carts for the Captain and vice-captains add to the competitive nature. Tiger Woods was a late pick as a vice-captain. 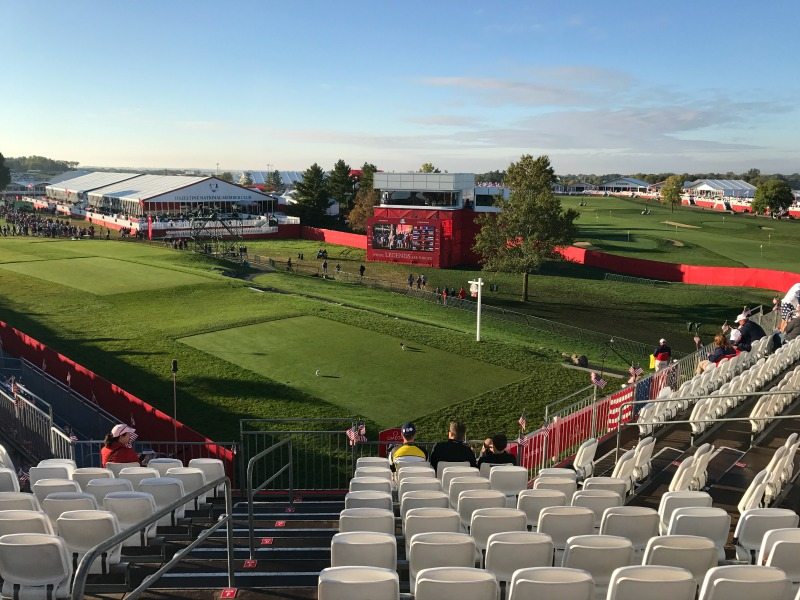 The first tee at a Ryder Cup is absolutely electric.   Fans show up in the dark to get best seats for the Friday start. The pressure is enormous on the first tee on Friday and then continues with every shot on every day with every contestant. 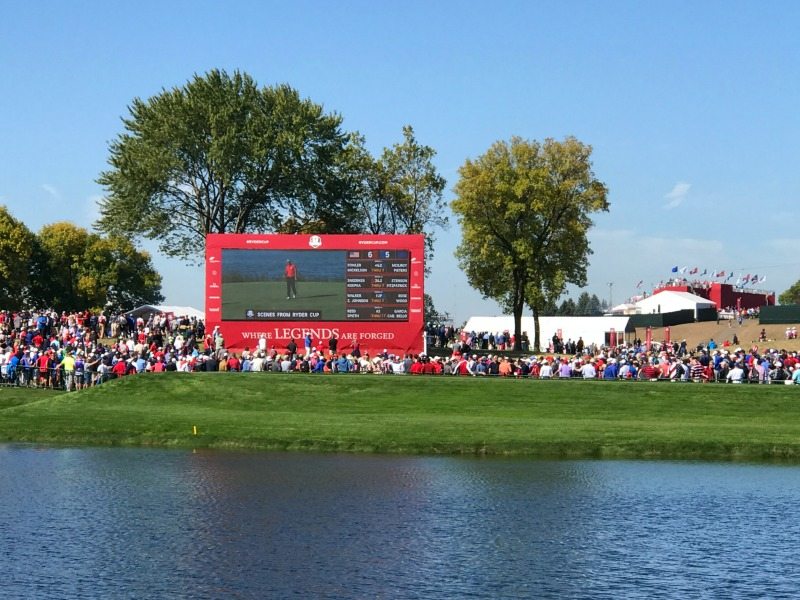 Given the loss in 2012 and the surrounding controversy, the popularity of the 2016 Ryder Cup at Hazeltine National Golf Club was at all-time highs. The Ryder Cup is unique as only 24 golfers participate.  Accordingly, spectators concentrated on fewer holes especially at the start of each day.  Jumbotrons broadcasting live enable spectators to keep up with the matches throughout the course. 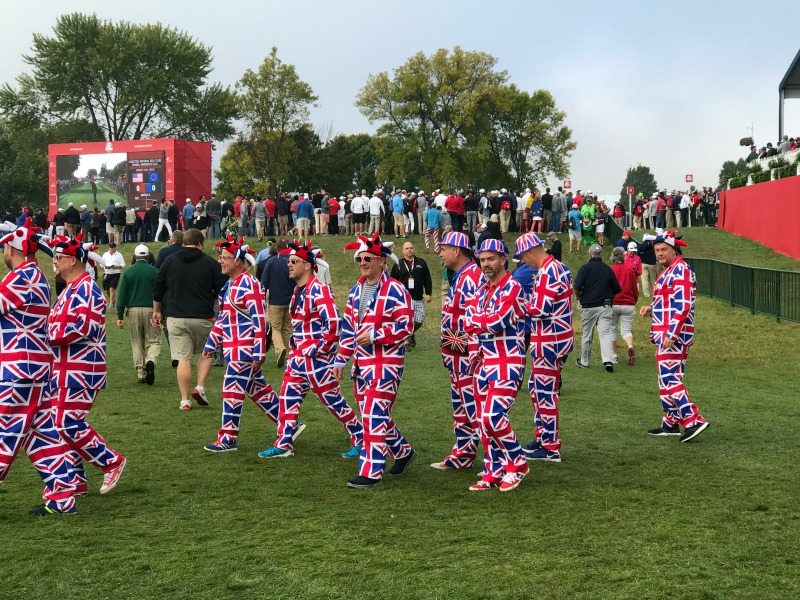 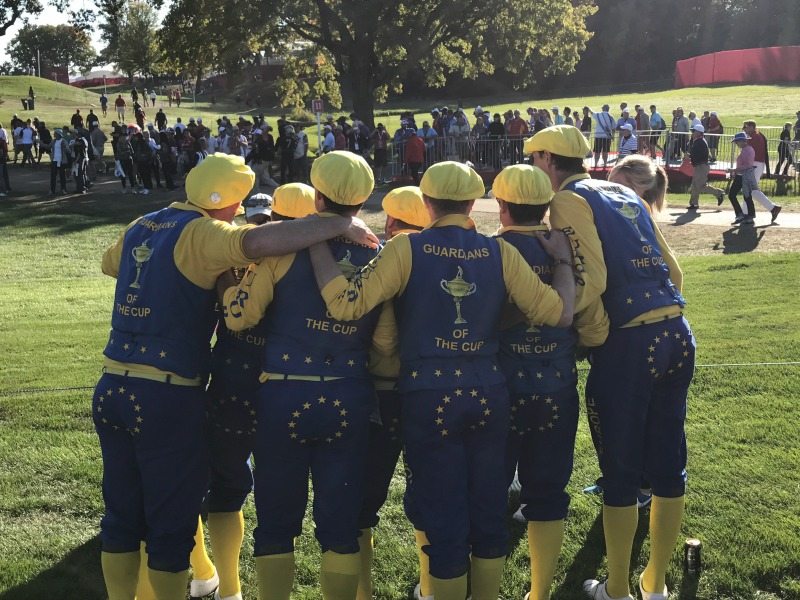 Colorful costumes were frequent.  Despite being contested in the middle of the United States, a very sizable and vocal contingent of  UK residents and Europeans attended.

UK, Ireland and  continental European players identify and unite under the EU colors and flag. So what will happen when the UK officially breaks from the EU? Many of the Europeans play on the US PGA tour.  As a result, some are very good friends with members of the USA team.  Nevertheless, as with the fans they are fiercely loyal to their team.

Hazeltine Golf Club was selected to host the event.   Built in 1962 the club was carefully built to host major tournaments.  Indeed, nine major tournaments between 1966 and 2009 were conducted there.   Securing the 2016 Ryder Cup was still a major coup for the Club.  They responded by providing a course that was in perfect condition.  It represents both a monster and a beauty.  Blending large water hazards with an abundance of large trees and sloping fast greens, it is truly Beauty and the Beast. 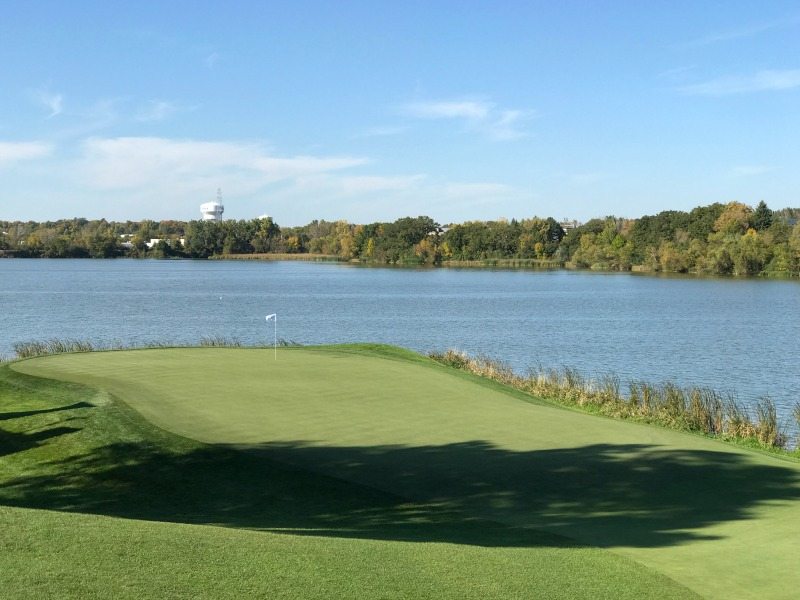 The Rory McIlroy vs Patrick Reed singles match on Sunday was unlike anything the Ryder Cup had ever seen.  It was the pairing that ever golf fan was hoping for.  It was hard to imagine that it could exceed the hype – but it unquestionable did.  The two played incredibly with an eagle and seven birdies on a four hole stretch from holes 5 to 8.  Hole #8 was perhaps the most electric and surreal of all time.  Rory pours in a 40 feet putt and and goes into a frenzy defying the crowd and cupping his ear with “I CAN’T HEAR YOU”.   Then Reed drains a 20 footer right on top of it, giving the crowd his Mutumbo finger-wag, and fist pumping Rory.   Despite Rory birdieing holes 5,6,7 and 8 he loses a shot to Reed.  Just amazing golf and better theater.  Reed ultimately wins the head-to-head match-up 1-up improving to 6-1-2 overall in Ryder Cups.

In respect to the recent passing of the King, Arnold Palmer, a large memorial mural was prepared for fans to write a personal message. Classy. 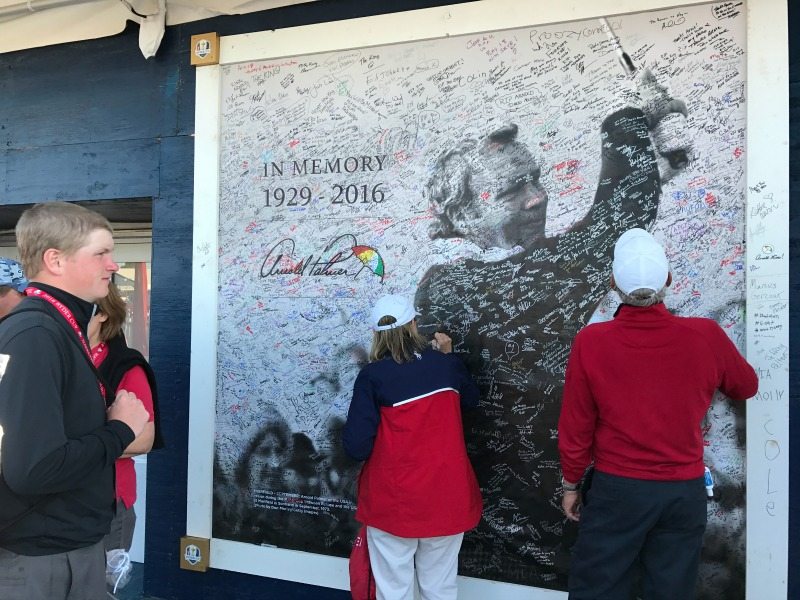