This may be the best golf course you'll ever play.

To play well here, you must have a variety of shots and absolutely keep the ball below the hole. 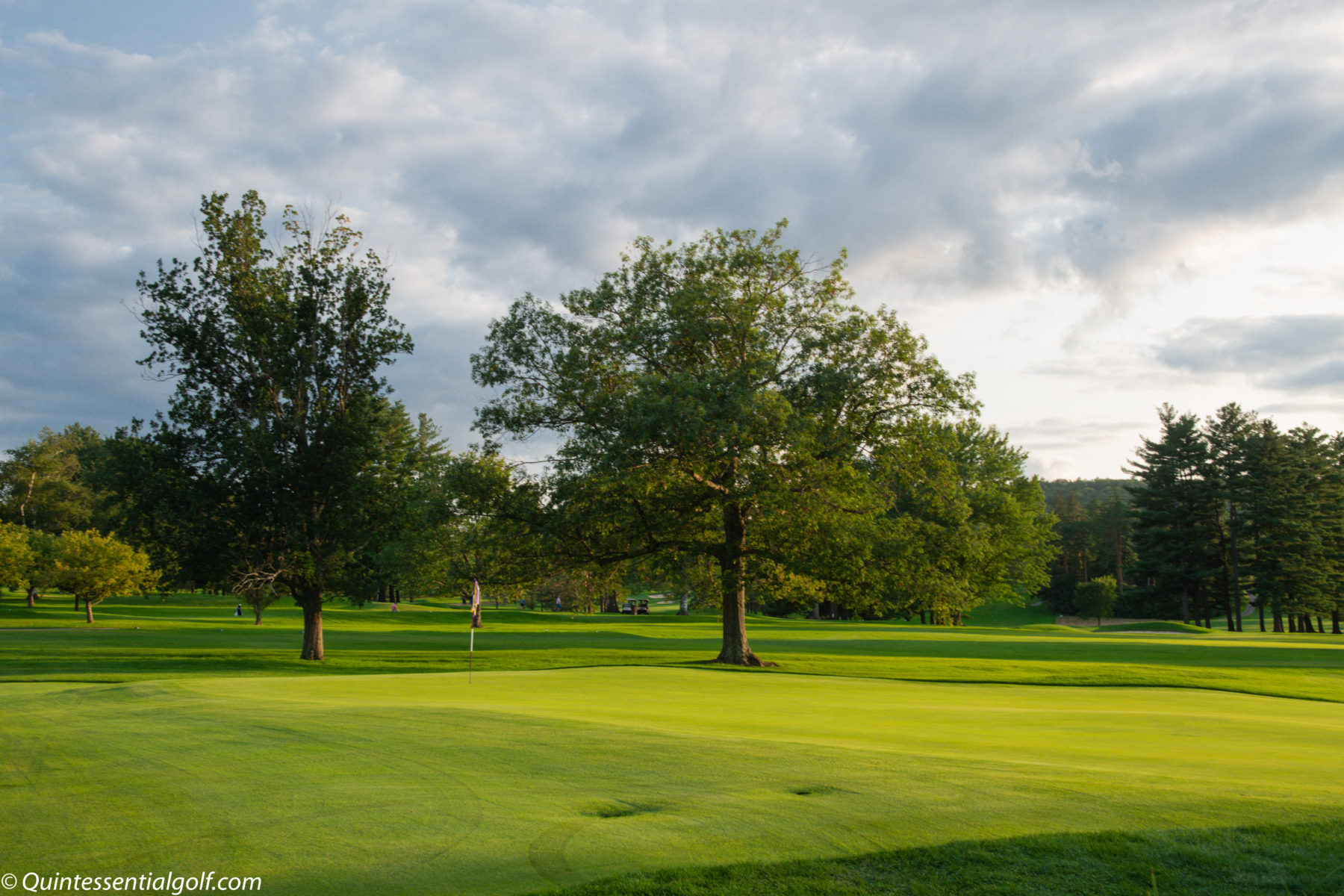 Whenever I’m near the #1 ranked public course in the state, it’s a must visit.  One of the top collegiate golf courses in North America, the Taconic Golf Club is on land owned by Williams College but operated by an independent board. The town was incorporated in 1765 as Williamstown named after Col. Ephraim Williams. He bequeathed money on the condition that they would establish a free school. In 1791 the school opened but failed as a free school. It became Williams College in 1793. Williams College is ranked as the #1 liberal arts college in the nation.

It’s just a few miles from the intersection of three states – New York, Vermont and Massachusetts.  Serious golfers who are traveling through the Hudson River Valley near Albany, New York should consider the 1 1/2 hour detour east to enjoy this jewel.  It’s an awesome area fall color foliage as well.

A classic northeast clubhouse with white siding and green shutters is surrounded by large colorful landscaping and a tall white flagpole.  Built in 1955, the outdoor veranda overlooking the golf course with a spectacular vista is a great place to enjoy a local brew.

Students, employees of the College and local townspeople use the course heavily. But it is open to the public.

The golf course was established in 1896, with seven holes.  Hole seventeen is original and one of the oldest golf holes in the country.  The current design completed in 1928 by the “Golden Age” architect firm of the 1920s, Wayne Stiles and John van Kleek.  Their intention to create a top level championship course, succeeding beyond expectations.  It’s regarded as their best design.  Further changes in 1955 created a par 71 6640 yard layout. Gil Hanse completed a major renovation project in 2009 to recreate original feeling.  The layout here is fantastic.

They line the fairways with a mixture of tall dense pine trees and short wide pine trees that wreak havoc with approach shots.  They built the course on rolling farmland hence they planted many of the trees to create the magnificent layout.

To play well here, use your imagination and play a variety of shots. They elevate many tees encouraging the aggressive driver play.  But most holes, especially on the easier front side, do not require a driver.

Be accurate on your approach shots. I’m told the greens are designed to accept shots from one side of the fairway better than the other.  Offline shots will find deep thick rough close to the greens.  Missing short side will ensure that you won’t get up and down.

Experienced players here will know where are the safest places to miss these greens.  You will miss these greens. They are small and amply bunkered. Three putts are commonplace above the hole with severe slopes.  You must keep the ball below the hole.

As is common on older golf courses in the East, cart paths are not contiguous as they end near the teeing ground and restart near the green. Conditioning of this golf course is lush and uniform. No lack of water here.

Look for the brass plaque secured to the large rock honoring Stanley Tworig, Sr. for his fifty years of service as greens superintendent.

Few colleges golf courses have the ambiance and diverse challenge as Taconic Golf course. It’s no wonder it has hosted many top events including the US Junior, Women’s and Senior Amateur championships and the NCAA championship three times.

Golf Magazine ranks in #42 in the “Top Courses You Can Play” in 2017. This may be the best golf course you’ll ever play.