One of the longest courses in the world, the Tips are 8191 yards. 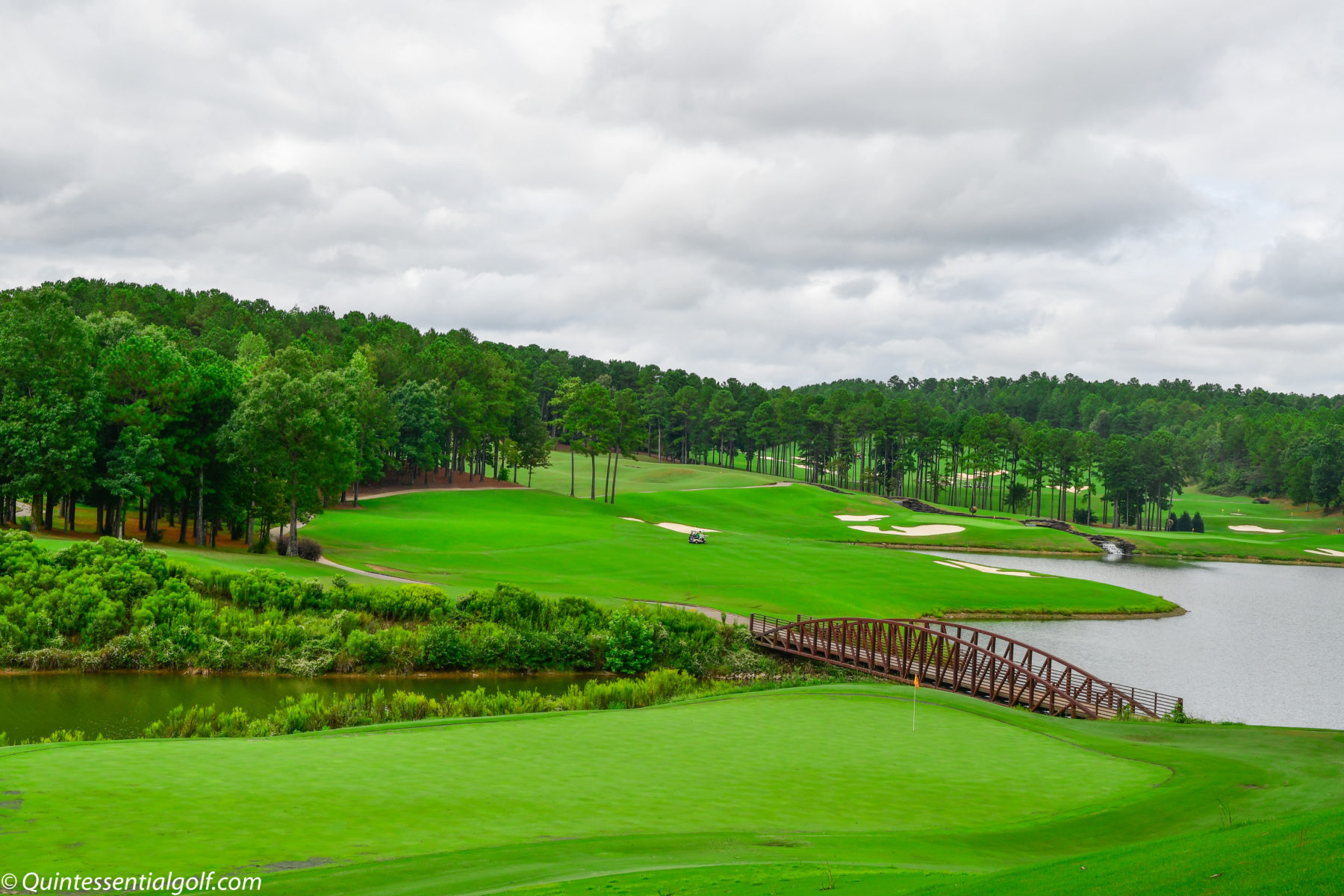 Beautifully carved into the rolling terrain of Shannon Valley, Ross Bridge is the newest RTJ Trail course opening in 2005.  Unusual for RTJ courses there is only one eighteen hole course at this site.  The course meanders through indigenous landscape and around the 259-room Renaissance Ross Bridge Golf Resort & Spa.

Ross Bridge is one of the longest courses in the world. The Tips are 8191 yards but they offer multiple tees for golfers of all levels.  It hosted the Champions Tour’s Regions Charity Classic from 2006 to 2010.

Alabama’s Robert Trent Jones (RTJ) Golf Trail is an assortment of 486 holes of championship golf  over 27 courses on 11 sites across Alabama.  Eight Resort Collection hotels on the Trail are Marriott or Renaissance properties.  The New York Times called the Trail “Some of the Best Public Golf on Earth”.  Dr. David Bronner, CEO of the Retirement Systems of Alabama, had a dream. Invest pension funds and build 26 world class golf courses that would challenge people enough that “they would want to come back and try again”.  He lured the legendary Robert Trent Jones, Sr. out of retirement and the rest is history.  The development of The Trail moved more dirt than the Panama Canal.  It astonished me to learn he opened eighteen courses in two years (1992-1993).  They added three more courses in 1999.  The final six courses opened between 2004-2005.  Bronner thought the courses would attract tourism to Alabama.  He was correct.  I ventured to Alabama to play quality public golf because of The RTJ Trail reputation.

The course meanders through an indigenous landscape.   The prestigious Renaissance Ross Bridge Golf Resort & Spa is prominent from all areas of the course.  Surrounded by foothills, it features elevation changes and forced carries that provide drama and danger.  I’m told the Champions Tour Regions Charity Classic moved away from Ross Bridge partially because of the challenging walk. Symbolic of an old parkland style golf course, ten holes play along the banks of two significant lakes connected by a spectacular waterfall dropping 80 feet between the ninth and eighteenth greens.  A stone-faced gristmill added to the waterfall reminds us that they built this course on an old mining site.

Like many other Trail courses, the par3 holes are incredible. Considerable elevation change combines with water or other natural obstructions to get your attention.

The Black tees at Hole fifteen is the highest point on the course.  Great for camera shots with elevation angles over water and most of the golf course.

A fantastic grass practice range includes targets comprising target bunkers and greens and an excellent short game area.  I could practice all day here.  At dusk you’ll hear the sounds of a bagpiper as he plays on his way to the practice putting green.

Hole 2 Par4 Purple 430 yards, Orange 395 yards.  From an elevated tee, the player faces a bunker complex at the corner of this sharp dogleg left.  Longer hitters may carry the bunkers and set up a shorter approach shot or play safe down the right side and leave a more difficult shot. Anything long rolls into the lake beyond the green.

Hole 4 Par3 Purple 202 yards, Orange 155 yards.  No options other than to carry 130 yards of water to a wide but thin green. Gusts of wind play havoc with club selection.  The Black Tees at 227 yards have a different angle.

Hole 9 Par4 Purple 410 yards, Orange 377 yards.  With water down the entire left side and a large bunker in the center of the landing area, they challenge players off the tee.  Leftward shots along the water leaves an approach over water.  Conservative shots landing on right side leave a longer more difficult approach.  A series of waterfalls in the background enhance the experience.

Hole 17 Par4. Purple 467 yards, Orange 411 yards.   A long Par4 with water bordering the right half near the green.  An infinity green abuts the water.  Across the lake is the picturesque waterfall tumbling between the ninth and eighteenth greens.

A well-manicured course, Ross Bridge is the crown jewel course on the RTJ Trail, and the most expensive.  The Renaissance Ross Bridge Golf Resort is spectacular.  There are abundant panoramic photo opportunities on the course. It should be near the top of your must play list when you consider the RTJ Trail.