A premier New England course with a variety of dramatic holes

Meandering through rolling hills, bunkering and elevation variations are the biggest challenges. 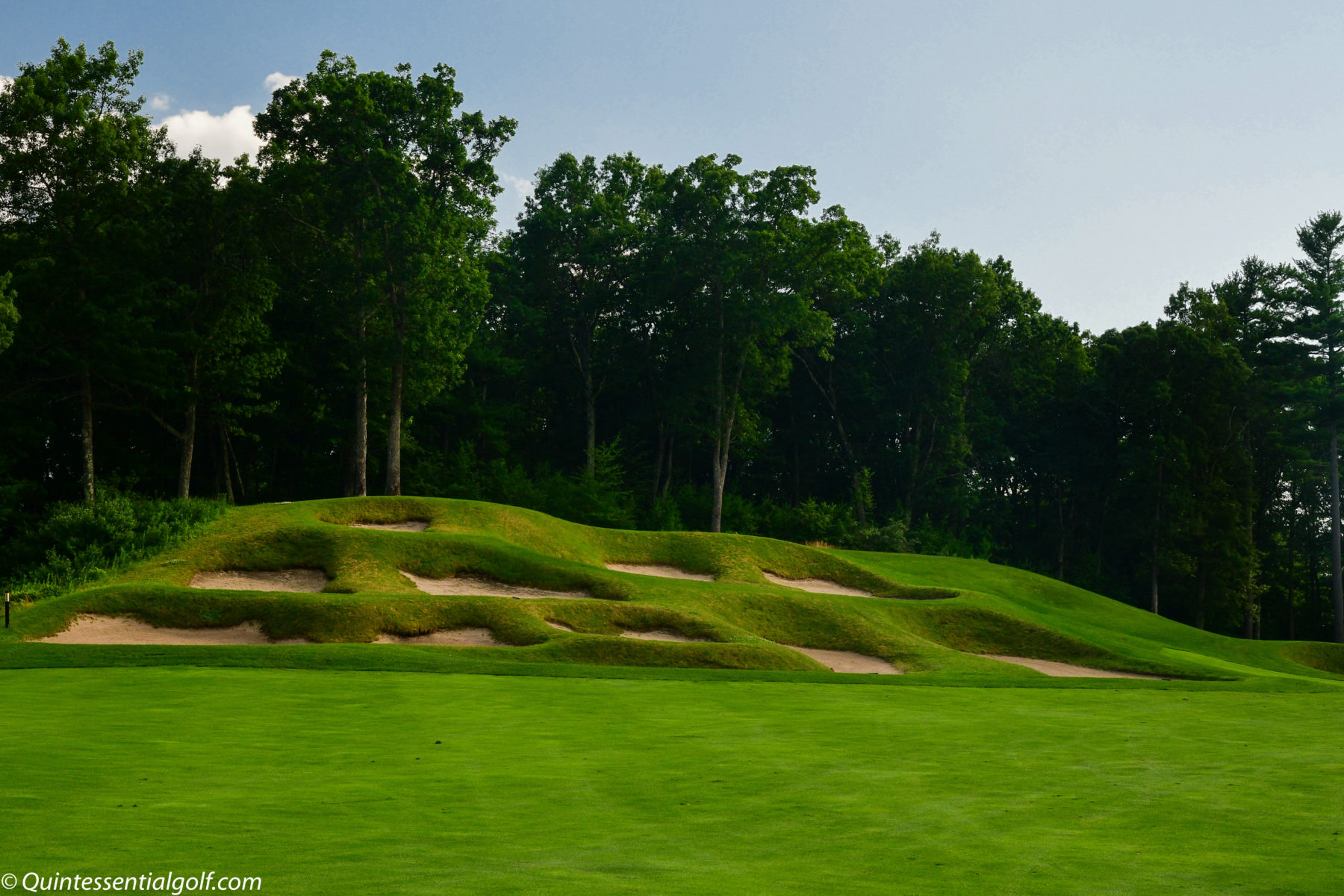 A popular golf destination for the Greater Boston area, Red Tail Golf Club is a gem that surprises even the most jaded golf critic.  Returning to New York from Quebec, I played late on a lazy summer afternoon.  Named after the majestic red-tailed hawks that soar overhead, it is the first Audubon International Signature Sanctuary course in the New England region.

Golf Magazine ranking of public access courses puts Red Tail at #2 in the state of Massachusetts.

A simple but adequate clubhouse includes a cozy back patio overlooking a large lake near the 18th green.  Classic tavern fare from the East and a cold brew after the round is a special treat.  Start with the Red Tail Chili or the New England Clam Chowder, you can’t go wrong with either.   The finish with either the Bunker Hazard sandwich – grilled chicken, BBQ sauce, bacon and cheddar cheese or the Three Wood sandwich – Corned Beef with sauerkraut and 1000 island dressing on a grilled marble rye.

Meandering through rolling wooded hills, tees are elevated and greens are often uphill. Gauging distance is a constant challenge with the varying terrain in both directions.

The terrain varies from classic New England forest landscapes of maples, birches and oaks to tall grasses and sands reminiscent of coastal courses.   Recovery from errant shots into these thick deciduous trees is impossible.

The conditioning is good but not great.  Thick lush fairways provided great lies in most cases.  Fairways are generous. It’s the bunkering and elevation variations that are the biggest challenges here.  The deep bunkers with large lips require you to play away from them like water penalty areas. Stay out of them as much as possible!

Greens are top quality and firm. Once you get to them, contours are fair and puttable.

On a cool and breezy day, the course is tough. Play the right yardage.

What makes Red Tail so unique is the variety of dramatic holes.  An exciting layout with dramatic par 5s and dangerous par 3s grab your attention.

The 568 yard par 5 second hole opens with a wide-open tee shot.   A sharp dogleg right hides the green while a large layered bunker complex runs up the left hill in the second shot landing area.  Play safe short of those bunkers and you leave a long approach. Or bend it right to avoid the bunkers to set up a shorter approach.

Then you face another risk/reward par 5 on the 525 yard fourth hole.  It’s one of the greatest par 5 tee shots you’ll find.  Bunkers left, right and long frame the desired landing area.  If you can clear the left bunker but not run through the narrow fairway on this dogleg right to the further bunker, you shorten the hole.  A bowl green with left and right greenside slopes funnel the approach shot toward the green setting up the two putt birdie.

Another standout is the par 3 eleventh. From a semi-circle elevated tee, the green rests 169 yards away, guarded by a large bunker right that is the jail for any right side pin locations.  Long and left is the play here. =

A two hundred yard waste bunker runs down the right side of the 390 yard par 4 dogleg right seventeenth.  Over the bunker is a wide open fairway.  Players can pick whatever carry distance they choose by cutting off as much of the waste bunker as desired.

The closing par 5 eighteenth is a diabolic par 5 at 572 yards (Silver).  The landing area is blind. Adventurous players will hug the right side or hit over the trees for placement in the fairway center.  The hole plays steeply downhill over a water feature to a narrow kidney shaped green with bunker left and water short right.  Most will layup with a short iron.  More adventurous (or crazy) players will gun for the green.

It’s no wonder they recognize Red Tail as one of the premier public access courses in New England.  It’s difficult, and harder when played from the wrong yardage.  The bunkers and elevation changes can kill you but the good decision making is rewarded.  Isn’t that how it should be?