Each hole incorporates the natural environment enabling a variety of looks and challenges. 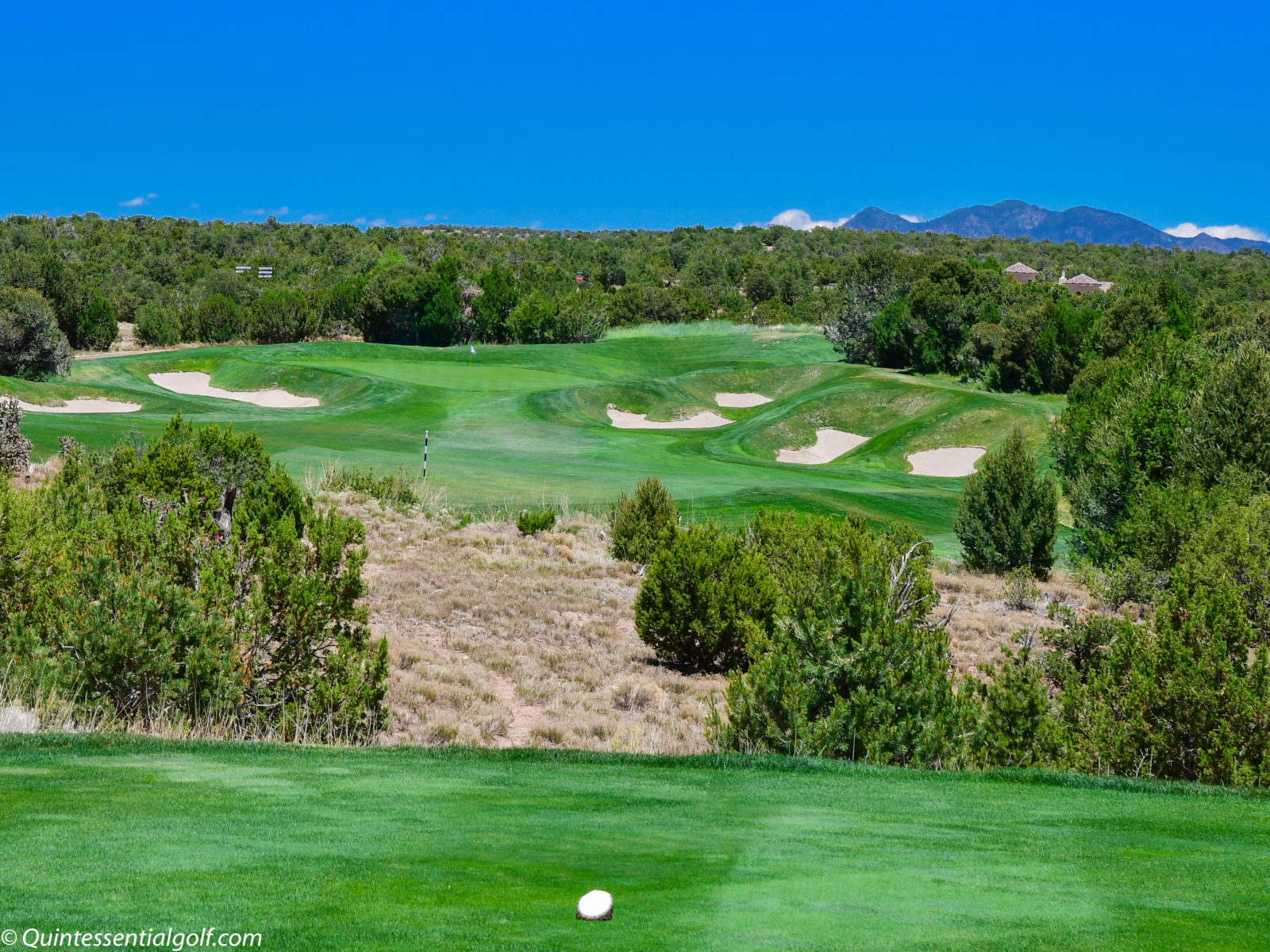 On a visit to see friends in Durango, Colorado, we flew to Albuquerque, New Mexico about two hundred and twenty miles to the south.  We knew there were few memorable golf course options near Durango.  But they cluster the best courses in New Mexico around Albuquerque and Santa Fe within ninety miles of each other. At 6500 feet in the Sandia Mountains, the natural terrain and scenery are rugged. Thirty minutes northeast of Albuquerque, Paako Ridge Golf Club stands out with its natural layout earning the #1 ranking in the state.

The elevation in northern New Mexico moderates the climate.  Hence, summer outdoor activities are commonplace.  Temperatures in the upper 80s to low 90s are typical, ten to fifteen degrees cooler that the searing heat of lower desert elevations like Phoenix, Arizona.  I found the area to be a popular destination in the summer.  A Pueblo style clubhouse keeps golfers well hydrated and cool.

Architect Ken Dye (no relation to Pete Dye) worked very hard to preserve the natural terrain.  Steep elevation changes, scrubby rock outcroppings and raggy bushes characterize this rugged golf course. Ken used as much of this natural environment as possible.  I see more mountain ranges than rooftops.  The course covers a large area with few holes close to each other.

Although these bentgrass greens and Kentucky bluegrass fairways are top-notch playing surfaces, “well manicured” is not a term I would use.  They are shaped and trimmed to maintain a “natural but not unkempt” look and feel.  It’s a balancing act and they succeed.  Despite some heat the summer conditions grass is green and lush.  The greens are uniform and well maintained.

This results in thick rough to extricate from. Varieties of cactus and rocks entangle balls beyond the rough. Better to leave them and return to safety.

Three similar nine-hole layouts cut through thick pinon, cottonwood and juniper trees.  In fact, Paa-Ko means “root of the cottonwood tree”.  It takes its name from the nearby ruins of a Tano pueblo. The site, an archaeological treasure, was excavated in the 1930s.

Some intimidating forced carries force you to make strong tee shots. Water comes into play on three holes.  The sixteenth is a short par3 over a rock-walled water hazard to a large well bunkered green with dense junipers in the background.

Fairways plateau in a variety of ways and often have slopes that carry your ball away to thick grass covered depressions when you miss the plateau.  This narrows the effective size of the fairways.

Paako Ridge Golf Club is special.  Each hole incorporates the natural environment enabling a variety of looks and challenges.  Carefully maintained conditioning tops it off.  And don’t forget the lack of houses, views of five mountain ranges and bargain-like greens fees.