Challenging with variety, gorgeous with trees and mountain views, manicured with meticulous landscaping and flowers and steeped in history. 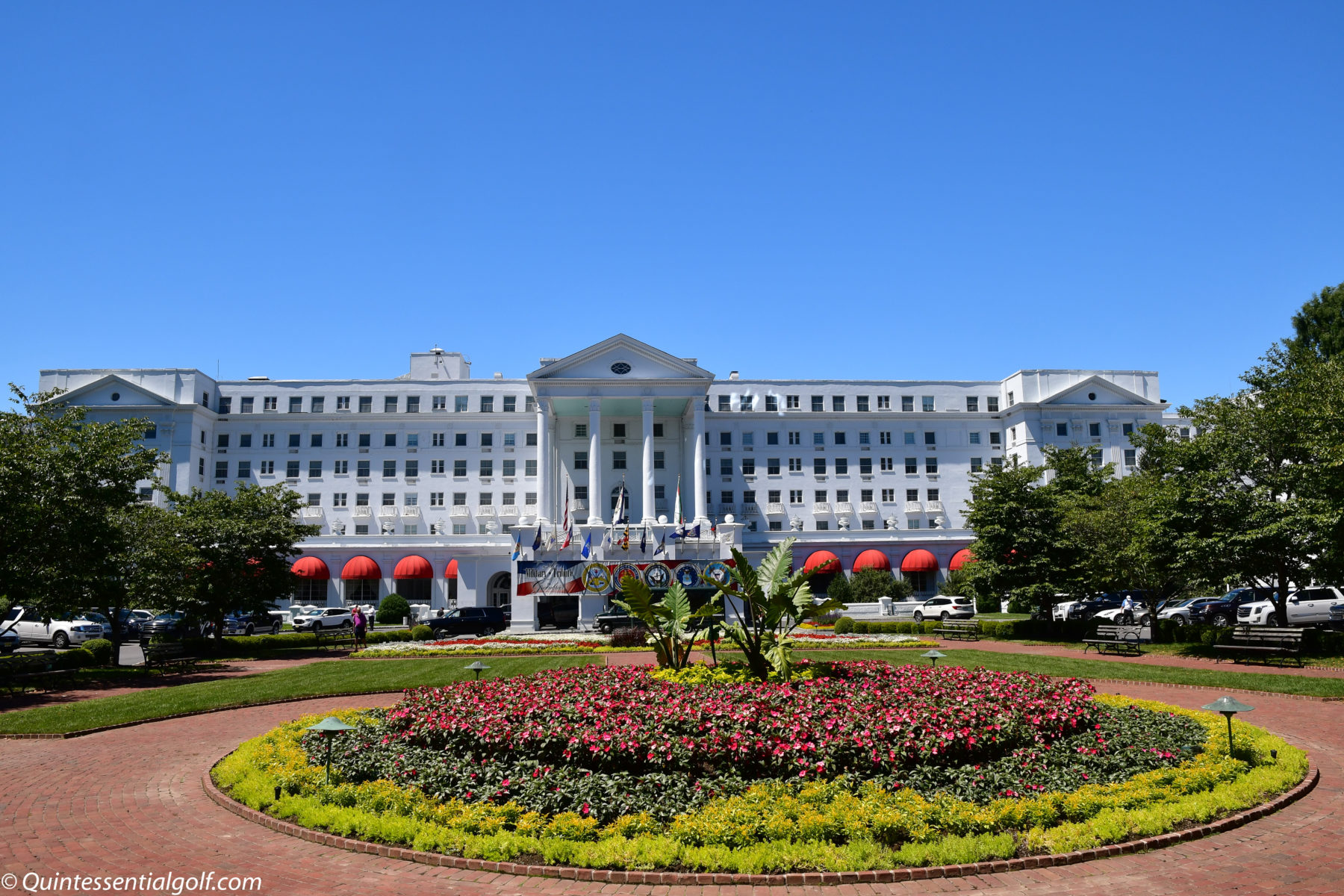 The package at the Greenbrier Resort was too good to pass up. It included a hotel room for two nights, two days of tickets to the PGA Tour event and a round of golf on the Old White TPC tournament course the Monday after the event.  It was a fantastic experience.  The hotel is out of this world – old school.  The golf course is a classic C.B. McDonald design in exquisite condition. It hard to overstate this incredible hotel and golf experience.

The Greenbrier is a luxury resort in the Allegheny Mountains of West Virginia.  With 720 rooms, 20 restaurants and lounges, an upscale casino, a shooting club, five golf courses, first class shopping, multiple pools, a bowling alley and countless on-site activities including carriage rides, tennis and croquet. With their Sporting Club you can Segway, horseback ride, fish, hunt, shoot, experience falconry, paintball and kayaking. Ample landscaping and flowers are something to behold.

Five historic courses make up the golfing palette.  They hosted the 1979 Ryder Cup and is now open as a nine-hole track. They restored the Old White TPC in 2017 now home to a PGA Tour event.  The Meadows is another eighteen hole course open to the public. The Snead course is a private course opened in 2004 for members of the Greenbrier Sporting Club. The Ashford is a fun 9-hole short course open guests of the resort.

Since 1778, guests have traveled to this White Sulphur Springs area to escape the coastal heat and take in the springs. The white-columned spring house with a green dome is the symbol of the Greenbrier and contains a spring of sulphur water at the center of the property. They built the Grand Central Hotel in 1858 known as “The Old White”.  During the Civil War, the property changed between Confederates and the Union Army. In 1910 the C&O Railway bought it and built a 250-room hotel which forms the core of the hotel today.  In  World War II,  the U.S. Army commandeered the resort as a hospital. Reopening in 1948 after renowned interior designer Dorothy Draper redecorated, it was the international social event of the season. In 2009, the resort filed for bankruptcy, ultimately being sold to Jim Justice, the current Governor of West Virginia. Reinvesting to upgrade the resort he added the casino.

The full 18-hole Charles B. Macdonald course opened in 1913, today known as “The Old White TPC”, the name of the hotel for the first 125 years.  Sam Snead became the head golf pro in 1944 and was the pro emeritus after retirement.  Tom Watson was once pro emeritus.  Lee Trevino currently holds the position.  When the Greenbrier course was a full eighteen holes it was the site of the 1979 Ryder Cup and the 1994 Solheim Cup (the women’s equivalent).  Owner Jim Justice brought the PGA Tour back in 2010 with the Greenbrier Classic now named “A Military Tribute at the Greenbrier” played in the fall.

The first tee at the Old White TPC course has a similar feeling as the first tee at Pebble Beach. Both are so steeped in golf history.  Many golf greats have stepped up to this perfectly manicured and elevated tee tucked up directly against the portico of the building – now used as the pro shop.  And only eighteen hours earlier, the leaders of the PGA tournament stood here to begin their final round.

The historic elements of Scottish links design from CB MacDonald integrate with modern turf practices creating a magical golf experience.  There are many private CB MacDonald courses.  Old White TPC is one of the few CB MacDonald courses with public access. Without the modern earth moving equipment available today, their challenge was to find holes in the existing terrain to implement their vision. After the devastating flood in 2016 architect Keith Foster restored it.

Mild sloping fairways roll through the dense tree-lined terrain of the Allegheny Mountains.  Large undulating greens add a unique dimension.  Many holes provided alternate playing options especially from the tee. The large variety tested all the clubs in my bag. A caddie is worth every penny, and not only because of the stories.  This was a most enjoyable round of golf.

This CB Macdonald (and Seth Raynor) course has implemented several of their renown template holes.  Those of you familiar with these should look closely to find these templates – an Alps (Hole 13), a Redan (Hole 8), a Biarritz (Hole 3), a Valley of Sin and an Eden (Hole 15).  It’s fascinating to see these templates come alive so vividly in perfectly conditioned golf holes.

Hole No. 1 (The First). An elevated tee box next to the pro shop with a magnificent view.  Easy to feel some pressure to get off to a good start.

Hole No. 3 (The Biarritz) is a 197 yard par 3 with the Biarritz template of a multiple-tiered surface.    When the pin is back and your ball is front, you’ll putt down a few feet then back up desperately trying to gauge how hard to strike.

Hole No. 5 (The Mounds) is a short 340 yard par 5 with a green prefaced by and surrounded by a plethora of nasty mounds.  No easy par for errant approaches.

Hole No. 14 (The Narrows). A 395 yard par 4 with a bunker in the landing area that covers the right half of the fairway forcing the drive to the narrow left landing area.  A false front with bunkers left and right guard this plateaued green.

Hole No. 18 (The Home). A finishing 151 yard par 3 with a severe two tiered green and four deep bunkers punishing errant shots on all sides. I’m told that Sam Snead shot is last hole-in-one on this hole – Number 42.

This was a fabulous day of golf.  This golf course is challenging with variety, gorgeous with trees and mountain views, manicured with meticulous landscaping and flowers and steeped in history.  The only downside is the $450 peak greens fee  ($395 for hotel guests).  With another $100 for the caddie it’s a major investment.  But like Pebble Beach, it’s worth it to cross this one off your bucket list.