Built on 600-acre Lake Saugahatchee, it was the first course opened on The RTJ Trail in 1992. 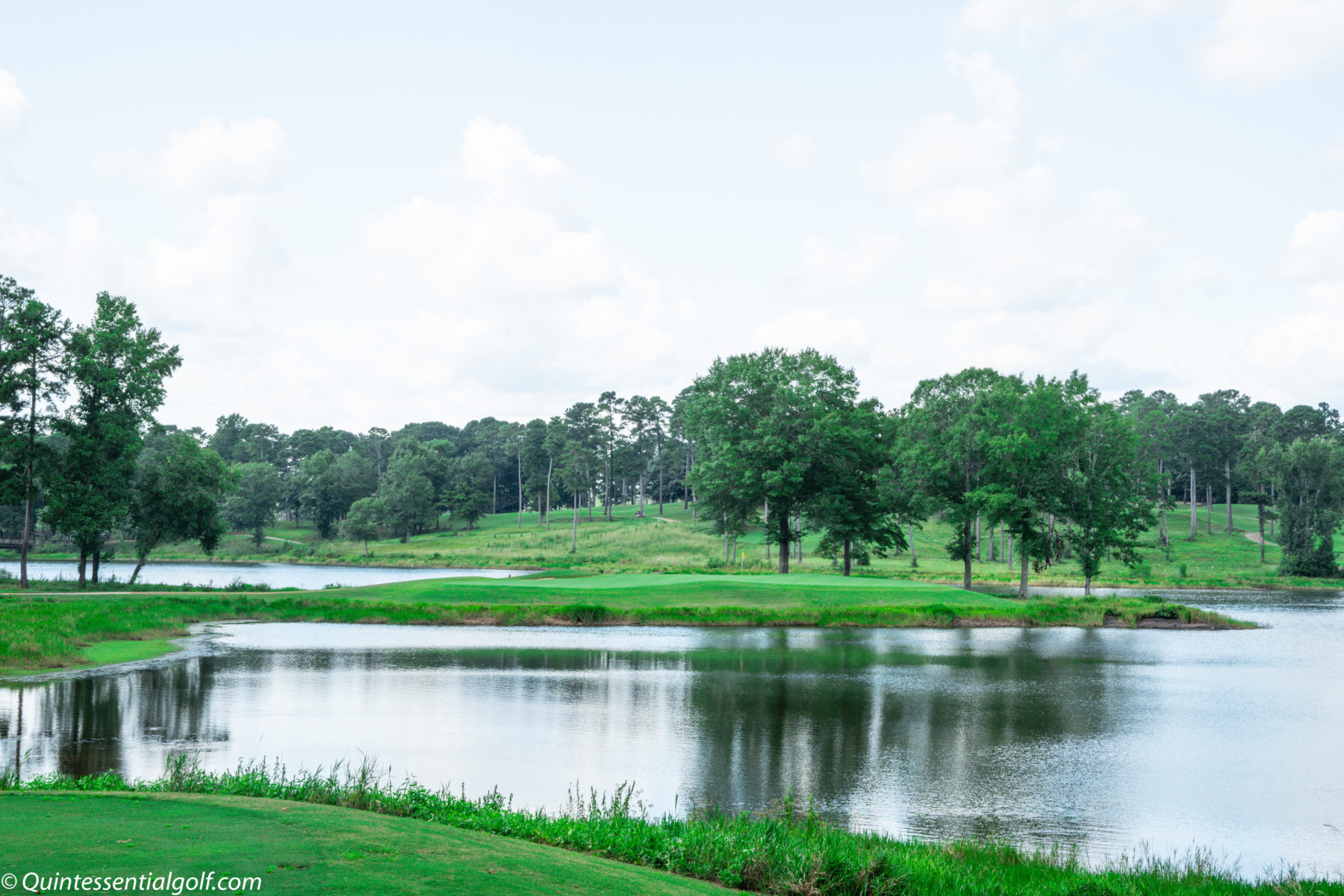 Grand National, a Robert Trent Jones (RTJ) Trail course, near Auburn/Opelika offers three 18-hole layouts, the Lake, Links and Short Courses.  I played the Lake course.  It was the home of the PGA Tour’s Barbasol Championship from 2015 to 2017, an event held opposite the British Open. Grand National, by all reports, was the single greatest site for a golf complex Robert Trent Jones, Sr. had ever seen. It was the first course opened on The Trail in 1992.

Built on 600-acre Lake Saugahatchee, 32 of the 54 holes drape along its filigreed shores. Both the Links course and the Lake course were in the top 10 of Golf Digest’s list of “America’s Top 50 Affordable Courses”. They list all three courses at Grand National among the nation’s 40 Super Value courses by Golf Digest’s “Places to Play”.

With 12 holes hugging the shore, Grand National’s Lake Course has a quartet of par threes as good as you’ll find anywhere.  The Links course has no weaknesses. The eighteenth is the strongest finishing holes in the RTJ Trail.   The Short Course has half its holes hugging Lake Saugahatchee and is one of the best in the nation.

Alabama’s Robert Trent Jones Golf Trail is an assortment of 486 holes of championship golf  over 27 courses on 11 sites across Alabama.  Eight Resort Collection hotels on the Trail are Marriott or Renaissance properties.  The New York Times called the Trail “Some of the Best Public Golf on Earth”.  Dr. David Bronner, CEO of the Retirement Systems of Alabama, had a dream. Invest pension funds and build 26 world class golf courses that would challenge people enough that “they would want to come back and try again”.  He lured the legendary Robert Trent Jones, Sr. out of retirement and the rest is history.  The development of The Trail moved more dirt than the Panama Canal.

It astonished me to learn he opened eighteen courses in two years (1992-1993).  They added three more courses in 1999.  The final six courses opened between 2004-2005.  Bronner thought the courses would attract tourism to Alabama.  He was correct.  I ventured to Alabama to play quality public golf because of The RTJ Trail reputation.

The practice area is all grass.  No mats here.

Part of this course is open with gentle mounds, many water areas and tall grassy areas.  There is a reason they call this the Lake Course. On seven holes Lake Saugahatchee comes into play.  Other parts of the course are tree lined with fairways that look smaller than reality. Grass is Bermuda. They place fairway bunkers to be a nuisance on most holes.  Bunkers and penalty areas are occasionally not visible from the teeing area. Bunkers often narrow the landing areas.   Check yard landing area yardages.  This is not a course that demands or rewards driver on every tee.  That’s a good reason to get a yardage book from the pro shop. Some greens jut into the water provide pleasant scenery while providing exciting approach shot opportunities.  Greens are large, gently rolling and usually multi-tiered. I also noticed a profusion of multicolored Fox squirrels darting in and out from the trees.

Hole 1 – Par4 364 yards.  The first hole is memorable and an unusual dogleg left.  Players start with a tee shot of only 170-200 yards to a landing area preceding a large bunker that bisects the fairway. A double tiered green guarded by water challenges the approach.

Hole 12 – Par5 493 yards.  For big hitters who can cut off a larger part of the water on the tee shot and clear the fairway bunker, this hole is reachable in two.  A tree impedes that goal if the player does not clear the water by enough margin.

Hole 15 – Par3. Back Tees 230 yards, Orange Tees 182 yards.  Playing to an island green, it’s all carry over water.  This may be the most scenic hole in the entire RTJ Trail.

Playing the Grand National Lake Course is a great depiction of the RTJ Trail.  It’s no shock that the PGA Tour played here for three years. And, it’s a remarkable value.